Showing posts from January, 2006
Show all

Putting a Curse on God

January 29, 2006
According to an article listed on the Reuters website a starving Kenyan woman placed a powerful tribal curse on God, accusing him of sending famine. Then, she died in her sleep.

The woman from eastern Kenya's drought-ravaged Kangundo district decided to invoke a dreaded oath from the Kamba community, famed for its potent witchcraft.

"Whoever brought this famine, let him perish," the woman chanted, striking a cooking pot with a stick.

"She accomplished the feat at 10 a.m. and waited for the results, but God's wrath struck at night. She died peacefully in her sleep," the Kenya Times newspaper said.

Poor rains for three years running have left more than 3.5 million Kenyans on the edge of starvation, prompting President Mwai Kibaki to declare the drought a national disaster.

I received this certificate in my e-mail today. Both of my blogs are listed at BloginSpace but I only got one for my Southern Expressions blog. I thought I would post it here anyways. Apparently, I tried to contact extraterrestrials and now I have a certificate to prove that I did. 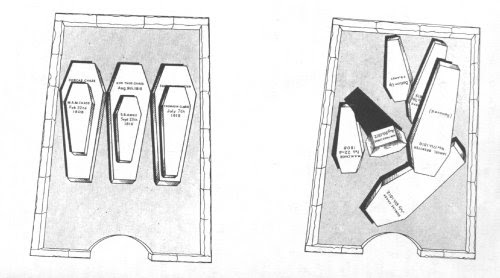 According to an article posted on The Shadowland's website, the coffins in the Chase Crypt, located in Barbados, is an unusual haunting. During the years of 1812 to 1820, the six solid lead coffins were found thrown around the sealed solid rock crypt after people reported hearing strange sounds coming from the crypt. Each time the crypt was opened, the coffins put back to their original locations and sealed again.

Lord Comberemere, the Governor of Barbados at the time, investigated this case. In July 1819, Lord Comberemere conducted a test. The tomb was opened and the locations of the coffins were sketched. The crypt was then sealed and a slab of marble that took 4 men to lift was put in the entrance. In April of 1820, noise was heard again from the sealed crypt. It was opened and the coffins were found moved about the inside of the crypt. After examining this, Lord Comberemere ordered all the coffins removed from the crypt and buried separately on the grounds of the cemetery of C…
Post a Comment
Read more

January 24, 2006
Back in October my short story "Blood Diary" won 2nd place in the Granite Towers and Runes contest. Considering this was pretty much the first horror short story I've ever written and submitted, I was very excited about this accomplishment. My prize was publication in Runes Ezine Winter '05 issue which is now available. Here is a small excerpt:


Leyla didn't acknowledge her friend's reluctant exit. Instead, she began packing up supplies. As she packed, Leyla noticed a small box hidden under the chair. "Where did this come from?" A black light sat nestled inside the mysterious box. It couldn't hurt to see if this room had any secrets. She turned the lights off and pulled down the shade. Positioning herself in the middle of the room, she flipped the switch.

"Don't tell me it needs batteries," she said, shaking it vigorously until it finally worked.

She examined every aspect of the room. Leyla couldn't believe what she found.
4 comments
Read more

January 21, 2006
According to an article posted on the Khaleej Times website, The family of Raju Raghuvanshi was told by a distant relative that he had died from a stomach ailment at a hospital in another city. His family in Katra Village performed last rites and organized a community feast to ensure peace for his departed soul.

When Raghuvanshi reached Katra, villagers locked their doors. His friends and brothers fled when he approached them. Since none of his family members visited him at the hospital, they believed the word of the relative that he had died.

After approaching the police, Raghuvanshi is in the process of having to prove to a local committee that he is indeed alive and not a ghost.

I apologize for not posting sooner. I've been patiently waiting to get my "new" computer. If you read my Southern Expressions blog then you know that I'm adding some new things to this blog in honor of the New Year.

You will soon see more paranormal links, polls, etc. Also, I'll be posting pictures (Picture of the Week), true ghost stories, and EVPs submitted by you. I'll come up with a list of submission guidelines and have them posted soon. There will be more posts about paranormal in the news as well as information about courses and equipment for paranormal investigations.

If you have any questions or suggestions about the upcoming changes, feel free to email me at: paranormal_stories2004@yahoo.com.
Post a Comment
Read more
More posts