Showing posts from January, 2009
Show all

January 28, 2009
Vincent Nostokovich a.k.a. Trapper Nelson was born in Trenton, New Jersey. Standing at six foot four inches tall and weighing at 240 lbs, he was no small man. He was the "Tarzan of the Loxahatchee River" though today could be better described as the Florida version of Steve Irwin. He owned land northwest of the wild Loxahatchee River where he built his camp and zoo. Nelson was very interested in real estate and owned up to 800 acres of land. Tourists including celebrities such as Gary Cooper and Gene Tunney came to see the wild man wrestle alligators. As the years progressed, this flamboyant trapper turned in to a hermit. He was convinced people were trying to take his land away from him and took steps to keep people from getting near his camp. He cut down trees to block the south side of the Loxahatchee River as well as put up gates. The only method he would accept company is by appointment. On July 24th, 1968, Nelson arranged to meet a friend at the John DuBois house.
Post a Comment
Read more

Ghostly Thirteen was inspired by the Thursday Thirteen meme. You list thirteen paranormal-related things like your top 13 posts (if you have a paranormal blog), mythical creatures, gods, haunted houses, etc... My Theme - New Jersey Folktales 1. Dem Bones 2. The Devil on Washington Rock 3. Enchanted 4. Birth of the Jersey Devil 5. The Ghosts of Ringwood Manor 6. The Ghost of Pearl White 7. Joseph Bonaparte meets the Jersey Devil 8. Moll DeGrow 9. The Spirit Lodge 10. Rainbow Crow 11. The Ghost Ship of Captain Sandovate 12. The Express Train to Hell 13. The Jersey Devil and the Hat
Post a Comment
Read more

January 26, 2009
Do you think there is any truth to the legend of the Bunnyman?
Post a Comment
Read more

January 21, 2009
I was joy-riding in the blog neighborhood and came across Ask Doc Paranormal . His post for yesterday was about a veteran mind reader who attended the Inaugural Parade in D.C. According to this mind reader, President Obama was "thinking" he would quit the presidency if he had to listen to one more high school out-of-tune band. I was in my high school band for a couple of years. I know an out-of-tune band isn't pleasant on the ears, but I don't think he would give up being the first black president because of something so trivial. Seriously, who would do that? It really doesn't matter. Those teenagers weren't bad enough to push him out of the White House.
Post a Comment
Read more

January 18, 2009
Some people have gone through great links to prove how fake TAPS is. I talk about the show quite a bit on Ghost Stories. But here's the thing. It's a TV show. I can understand how loyal fans could feel so deceived by suspicion of faking evidence. but it's a TV show. Strike that. It's a reality TV show. If you thought you were going to get "real" from reality TV, you were wrong. TAPS signed on for this. Like any TV show, they or Sci-Fi has to do what they have to do to keep ratings up. I don't know if all the evidence people are pointing out as fake are truly that. I don't know if TAPS are fabricating evidence. I doubt that is something they would come out and admit unless forced to confess the truth. I watch the show because it's entertaining. From all the other paranormal shows I have to choose from, I'd rather watch this one. They at least show the appearance of professionalism and aren't running around screaming or offering their best
Post a Comment
Read more

January 15, 2009
Every city, town and/or state has their own quirky landmark. Here in Tulsa, Oklahoma, we have The Cave House. According to legend, the house was built in the 1920s by Joseph Koberling Sr. and James Purzer fronting a chicken restaurant by day and speakeasy by night during Prohibition. Pretty Boy Floyd was considered one of The Cave House's famous customers. It's unusual architecture and dark, musty appeal gave the place it's name and a few others by locals: The Weird House, The Flintstones House, The Hill House, etc. Some say there was a secret door and tunnels that extended throughout the hillside. Linda Collier, current owner, has yet to find the door and tunnels were sealed off long ago. Although some believe remains of Klan victims are hidden within the tunnels. A secret mass grave of the 1921 Tulsa Race Riots may also sit adjacent to the house in Newblock Park. If either are true, it may explain the reports of The Cave House being haunted. A paranormal team in Tuls
Post a Comment
Read more

January 14, 2009
There have been many theories regarding the paranormal. A recent study by Durham University suggests coffee intake may play a factor in some eyewitness reports of spirits. Two hundred students were quizzed on their caffeine intake and it's effect, revealing interesting responses. Those who consumed seven cups or more of instant coffee are more likely to see, sense or feel what was not there than those who drink one or less cups daily. This study wasn't limited to coffee drinkers. It explored the effects of those who consume coffee, tea, chocolate bars, caffeine pills and caffeinated energy drinks. Could consuming high levels of caffeine debunk some eyewitness reports of the paranormal? Full article: http://news.com.au/heraldsun/story/0,,24911656-663,00.html
Post a Comment
Read more

January 13, 2009
Ever since I first wrote about Ghost Adventures, I have received email after email from people who think I'm associated with the show. So many I feel the need to state this publicly. I'm not on the show. I don't work for them. I don't know the guys on GA. I've never even met them much less passed by them on the street. I'm glad your fans and want to get in touch with the stars, but I'm not one of them. They have a website and a myspace page . Contact them through those places. Please don't email me unless you're interested in something I wrote on this blog or a place they've been to or anything in between. If you do email me thinking you're contacting them, it will go unanswered. Thank you.
Post a Comment
Read more

January 12, 2009
Could Hypnagogia a.k.a. sleep paralysis be the answer to sightings of bedroom ghosts?
Post a Comment
Read more

Devil on My Door 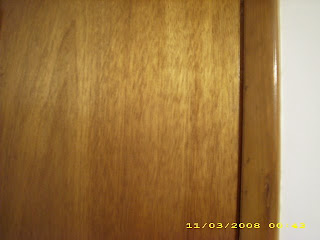 I know the picture is a bit blurry, but you have to see it. There's a face on my door. I don't recall ever seeing it before but I do now. Usually people have to point these things out for me. I know TAPS calls it matrixing but I don't remember what others refer it as. I understand the grain of the wood is what the cause of it, and by no means do I believe it is paranormal related but it's still creepy. Don't you think?
Post a Comment
Read more

January 05, 2009
Do you think it's possible to swap bodies with another person?
Post a Comment
Read more

January 04, 2009
Over the holidays, lights identified as possible UFOs were seen in the skies of Northern England. However, some weren't as mysterious as were thought to be. A wedding may be responsible for sightings on Dec 27th. Fifty orange, candle-lit Chinese lanterns were released in to the air in the same area some reports were made. This isn't the only time orange lights have been seen. UFO expert Sharon Larkin is investigating other mysterious sightings to determine if lanterns were responsible for those as well. An excellent example as to why you shouldn't believe every odd thing as being paranormal. http://www.ufonewswatch.com/northern-englands-ufo-mystery-solved-aol-news-newsbloggers
Post a Comment
Read more
January 01, 2009