The Ghost Hunters crew are returning to the Mark Twain House and Museum for tonight's episode. A couple of years after marrying Olivia Langdon in 1870, Samuel Langhorne Clemens a.k.a Mark Twain decided to move to Hartford, Connecticut. He had visited years prior to meet with his publisher Elisha Bliss Jr from American Publishing Company. During this visit, he became attracted to the town and wanted to be closer to his publishers. The Clemens Family rented a house in the Nook Farm neighborhood in 1871. Then, bought land and began construction on a new home.

Designed by a New York City architect named Edward Tuckman Potter, the 19-room Victorian Gothic structure contained bay windows, fireplaces from India, hand-stenciled paneling and an enormous hand-carved mantel purchased in Scotland. The top floor was the billiards room and study where Twain wrote some of his notable works including The Gilded Age, The Adventures of Tom Sawyer, Huckleberry Finn and The Prince and the Pauper late at night. His children had their own nursery and playroom/classroom. They moved in after it was completed in 1874 and lived there with his wife and  children. The couple had three daughters named Olivia Susan (Susy), Clara Langdon and Jane Lampton (Jean). They also had a son but he died 19 months after he was born from diphtheria in 1872. Seven years after the house was completed, an additional strip of land was purchased leading to the kitchen and front hall being enlarged, the driveway redrawn and the installation of new plumbing, heating and a burglar alarm. Unfortunately, the lavish lifestyle in Connecticut would soon come to an end. 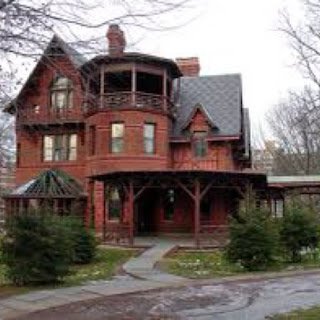 Mark Twain had formed the company Charles L. Webster & Company which published his writings along with Ulysses S. Grant's memoir. After about ten years of business, his company went bankrupt in 1894. He succumbed to several other investment losses and bank panics. Thus, forcing him to move his family to Europe in 1891. He began lecturing to pay off his debts. During one of his European lectures, his oldest daughter Susy died from spinal meningitis in 1896 at their home in Hartford. She was 24 years old. The Clemens wouldn't return to Connecticut until 1901 where he had another house built named Stormfield in Redding. Jean moved in with her father and worked as his personal secretary until she died on Christmas Eve in 1909 from a heart attack as a result of a seizure (she was diagnosed with epilepsy when she was 15) at the age of 29. Clemens himself lived in Stormfield until he died on April 21, 1910. Clara would be the only Clemens child to out live their father.

The Clemens Family sold the house in 1903. After Susy's death, they never could return to the home they treasured so much. Over the years, the house was turned in to a school, apartment building and library. It became a National Historic Landmark in 1962 and underwent a multi-million dollar renovation/expansion in 1974. Today, the house functions as a museum dedicated to Mark Twain's life and work.

While a visit to Mark Twain's House and Museum will invite you in to the world of a great American writer, you may encounter a ghost as well. Staff and visitors have experienced a wide range of paranormal activity including seeing shadows, hearing voices and footsteps, and having their clothes tugged on. Others have smelled cigar smoke (especially in the Billiards room), seeing orbs, hearing children's laughter. There have been sightings of a woman in translucent period clothing (possibly the spirit of Susy) on the 1st/2nd floors and an African American male (possibly the ghost of the Clemens' worker and freed slave George Griffin) seen on the 3rd floor. Of course everything in the Twain House may not be sweet and nice. There are reports of growling and things being thrown at people in the Basement.