Showing posts from November, 2010
Show all

November 29, 2010
Do you believe a zombie apocalypse could actually happen? If so, do you think the world's population is ready for it?
Post a Comment
Read more

I want to wish all my American brethren a safe and Happy Thanksgiving.

November 24, 2010
The laws of physics are defied in this all-new sneak peek clip of the next episode of Fact or Faked: Paranormal Files. The team is trying to replicate a video from the ’71 mission of Apollo 15 where a hammer and feather are dropped on the moon at the same rate. Clearly this is impossible on Earth, so you’ll have to watch the clip and tune in on Thursday the 2nd at 10/9c on Syfy to find out if they’re able to pull of replicating the original historic mission.

In related news, Syfy has ordered new seasons of Ghost Hunters International and Fact or Faked: Paranormal Files as well as an additional 12 new episodes for the current season of Hollywood Treasure. The second season of Fact or Faked: Paranormal Files will begin production in early 2011. Ghost Hunters International will return to conclude its second season with seven all new episodes and team reshuffle with new team member Kris Williams beginning Wednesday January 5, 2011 at 9:00 PM ET/PT. Investigations will include visits to …
2 comments
Read more In the six years I've been maintaining Ghost Stories, I've come across a lot of good people in the paranormal community. Unfortunately, most have since closed up shop. This leads to the recent award that has been passed on to me.

Dinell Holmes from Weekly Spectre created the Paranormal Community Leadership Award to recognize those who genuinely try to benefit this field. No fakes. No frauds or anyone trying to gain some fame and fortune. Just those who are a positive part of the paranormal community. Unfortunately, due to family and time constraints, she's having to say goodbye to Weekly Spectre, but you can still catch her at her other blog Mommy D's Kitchen (highly recommended).

As for this award, I have Courtney from Haunt Jaunts and Jessica from Ghost Stories and Haunted Places to thank. Both deserve this award ten fold. There's not any rules on how many people to pass this along to. Normally, I don't like passing awards along. Not because I don't want to…
2 comments
Read more

November 18, 2010
In Salem, West Virginia, sits an old railroad tunnel called Flinderation Tunnel. It's location is not far from the Trans-Allegheny Lunatic Asylum. The structure itself is about 1,000 ft in length and was built in the 1860s. There are many alleged reasons for its weight in paranormal activity.

One tragedy began with three men working on the tracks inside the tunnel in the 1800s or early 1900s. A train approached them at high speeds and very little warning. One man escaped to a cubbyhole unscathed. Another was supposedly cut in half by the train. And a third was dragged about 75 feet trapped under the train, causing it to derail. He didn't survive.

Another story associated with Flinderation, deals with the infamous KKK. Supposedly, in the mid 1900s, they brought many of their victims to the tunnel. It became a regular lynching spot for them. It was officially "shut down" and the tracks were torn up in the 1990s. Today, it's a part of the North Bend rail trail.

Six years ago today, I set up my first blog on AOL Journals. I became motivated to start one after watching numerous specials about ghosts and the paranormal during Halloween. My interests were peeked and I started doing research. I noticed there wasn't a lot of websites that contained straight complete information about certain locations at the time. I had to go to several different sites just to get the overall feel for why the place may be haunted. This led to me setting up a blog on AOL Journals and commenced in writing my first post.

Traditionally, this would be consider a very celebratory event with balloons, cake and maybe a giveaway or two. Unfortunately, I'm knee deep in National Novel Writing Month and catching up on reviews at the moment. Haven't had the time to put on together. So, the celebrations will be put off and converted in to an end of the year kind of thing. More details coming soon. In the meantime...

November 14, 2010
To understand the purpose of a purgatory museum is to understand the concept of purgatory. Purgatory is a halfway point between Heaven and Hell. It's a place for the souls of people who lived good enough lives to avoid eternal damnation, but not good enough to join the angels in Heaven. Prayers by the living can reduce a soul's time in Purgatory.

Relatives offer up prayers or pay for entire masses to be said for the departed. A tormented soul sometimes returns to Earth to ask for help. These visitations were rather common during the seventeenth, eighteenth and nineteenth centuries. The spirit would appear to a relative or friend. Then, reveal it was in torment, and ask for prayers to shorten its time in Purgatory. As proof of its presence, it would touch its burning hand to a nearby object or clothing.

In Rome, a museum has collected these objects for visitors to view. The Piccolo Museo del Purgatorio or the Little Museum of Purgatory is housed in the church of Santo Cu…
4 comments
Read more

November 13, 2010
In this all new sneak peek clip of the next episode of Ghost Hunters Jason and Grant are at it once again, and the paranormal might be playing games with them. Grant thinks Jason pushes him in the shoulder and Jason is responding to questions Grant isn’t asking. Who or what is pulling these pranks? Is the paranormal trying to communicate? Don’t miss this episode as legendary rocker Meat Loaf rejoins the team for an unforgettable hunt in Alabama at Sloss Furnace. Watch the clip and tune in Wednesday, the 17th at 9/8c only on Syfy.
Post a Comment
Read more

November 09, 2010
In an all-new sneak peek clip of the next episode of Fact or Faked: Paranormal Files, the team tries to walk through a video with the man who filmed the unexplained. A scene set among evergreens in the forest causes the man to feel immediate sickness and pressure when coming in contact with an unknown creature. Everything that happens leaves the man lost for logic. Be sure to watch the clip and tune in on Thursday, November 11th at 10/9c on Syfy to see if the team can help make sense of the encounter.
Post a Comment
Read more

Murder in the Thumb 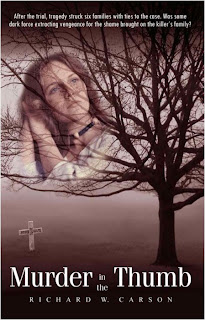 Murder is an infrequent visitor in the Village of Caro, a community of 4,000 in Michigan's Thumb area.

When Robin Adams disappeared on a steamy August night in 1976 leaving a two-year-old boy for whom she was babysitting unattended, her friends and family feared the worst.

Her former boyfriend, Melvin Garza, a fiery 19-year-old Mexican-American, had angrily opposed Robin's attempts to break up with him.

Lost amid concern for the missing 17-year-old, who would never have left the little boy alone, was the strange prophesy of a Ouija board. A year or so earlier, the board "said" Robin would die before her 17th birthday.

This was but the beginning of a litany of bizarre of events, some tragic, most lacking logical explanation. Rumors of black magic practiced against a key witness, the extraordinarily accurate predictions of two psychics whom police consulted combine to create a story with a surprise around every corner.

Add to that, the rar…
3 comments
Read more

November 04, 2010
In pop culture, we see vampires in various ways. There's the brooding, cursed kind who has a tendency to be a bit obsessive at times. The monsters with pointy ears and long claws who live in castles and steal guy's wives. As of now, they are seen as fast, romanticized and glittery or sleep in coffins and sips synthetic blood from bottles. However in parts of South America, another type of vampire tale is told. People talk of the fearsome Pishtacos, shadowy pale-skinned figures who stalk peasants along dark roads, kill them and drain them of their fat. These stories date back about 400 years. The first mentioning of this creature was by the priest Cristóbal de Molina, a scholar of native languages and Incan culture in 1571. He described natives living around Cuzco wouldn't deliver firewood to a Spanish home for fear of being killed and having their fat used as a remedy for some foreign disease.

The tale of the pishtaco seems to change with each generation. His wardrobe is r…
5 comments
Read more

November 02, 2010
In this all-new episode of Fact or Faked: Paranormal Files the team attempts to replicate a flying object across Skull Canyon. It sounds inviting right? They’re having a tough time making it look like the original where it appears as though someone is in the fetal position, or simply just a dark blob, is just floating through the air. They’ll have to put their heads together to make it truly look authentic to the original. Tune in on Thursday, November 4th at 10/9c only on Syfy to see if they can make it seamless.
1 comment
Read more

November 01, 2010
Vampires have often been known to drink blood and even energy. But do you think a vampire could sustain his/her life by snacking on human fat?
1 comment
Read more
More posts