Showing posts from June, 2010
Show all

June 30, 2010
The Stanley Hotel is infamous among the paranormal circles, but another Estes Park inn has it’s share of ghosts as well. Newlyweds Gordon and Ethel Mace visited Estes Park in 1911 on their honeymoon and fell in love with the area. So much they decided to build a homestead on the property. Initially only a small cabin was built on the land and rhubarb was planted to fulfill the requirements of the Homestead Act. To increase their income, they built several tourist cabins. With their success, the Mace Family made plans to build an inn. With financial resources being quite limited, the Mace family used what natural resources were available and constructed the inn from hand-hewn timber cut from the property and massive stone fireplaces were built to provide warmth and hot water. The Baldpate was opened in 1917 boasting such amenities as hot running water, electric lights, and indoor plumbing. Mystery novelist Earl Derr Biggers visited the inn and stated it was so similar to the "i
6 comments
Read more

June 28, 2010
Do certain locations attract all things supernatural including ghosts, aliens and strange creatures? Why or why not?
Post a Comment
Read more

June 27, 2010
Much like its counterparts, a portion of Vermont's green wilderness gained a reputation. Between the years 1920 and 1950, a number of people vanished without a trace. In his book, "Green Mountain Ghosts, Ghouls, and Unsolved Mysteries", Joe Citro dubbed an area in Bennington near Glastenbury mountain the "Bennington Triangle". Not only have people disappeared, defying explanation, it has also been an alleged hot spot for UFO activity, strange lights, sounds, odors, specters, mysterious creatures. Even Native American's shunned the place. They believed the land to be cursed because all four winds met in that spot and some Native American folklore speaks of an enchanted stone which swallows anything to step upon it. How many of these claims are true, I am not certain. However, the disappearances have been documented. On November 12, 1945, 75 year old Middie Rivers led four hunters onto the mountain. As the group was returning to camp, near Long Trail Road an
2 comments
Read more

June 25, 2010
After ten years, Yvette Fielding has made the ultimate decision to leave Most Haunted as their hostess. A statement was posted on the website for the show's production company Antix Productions, which she set up with her husband Karl Beattie. Fielding stated she spent the last year soul-searching before making this decision. She feels it's time for her to move on and pursue other projects but hopes the show continues with a new a host. Most Haunted has as of yet to announce any plans to search for a new host. Don't think this announcement is taking her out of the field all together. Fielding is continuing her hosting duties on ITV2's Ghosthunting with... , a British paranormal program where celebrities help investigate haunted locations. I've never really been a big fan of Most Haunted but if they do decide to find a new host, I hope they choose someone who isn't so annoying. Perhaps even give it some credibility. Although, I'm not holding my breath.
4 comments
Read more

June 23, 2010
The voices of children attempt to lure visitors in with their "Come on, come on". A misty dark fog envelopes you when you stand in the middle. Dark silhouettes have been spotted darting in and around the location. Such accounts are common among some haunted locations. Why should Poor House Road Tunnel in Lexington, Virginia be any different? Hauntings spur from stories, rumors and legends. In this case, the tunnel's past can only be spoken as a legend. It began as part of a railroad system that ran from Lexington to Staunton in the early 1900s. However, it's dark past can not be verified. According to some locals, the tunnel was allegedly a location for many lynchings in the 1900s. A story to account for the phantom children voices supposedly took place in the nearby woods. Two girls were playing when they came upon an unknown male who shot and killed them both. There's also rumors of a woman being raped murdered inside the tunnel. As stated before, it seems n
5 comments
Read more

June 21, 2010
What do you think is causing cattle mutilations in Colonia Belgrano, Argentina?
1 comment
Read more

June 16, 2010
In Linwood, a member of one of the biggest landowning families in Scotland is believed to have cursed the economy...or at least she is being blamed for 30 years worth of misfortune. Lady Anne Speirs' curse was brought to life, over a century after her death, in the early 1980s when Rootes Car Plant, Linwood's main source of income, shut down. Legend states Lady Anne pledged a curse on anyone who disturbs the crypt, recently rediscovered by contractors working for Tesco. Superstitious locals are warning that soon-to-be-approved plans to move the remains of five people from a mausoleum and reunite them with their descendants in North Berwick will bring tragedy to the Renfrewshire town due to this curse. However, it's unlikely supermarket giant Tesco will alter their plans to move the remains to the East Lothian town for a new supermarket and community facilities to regenerate the area. Tesco immediately moved to have the bodies disinterred, but a court order stalled th
4 comments
Read more

June 14, 2010
Fact or Faked: Paranormal Files is an upcoming new series on Syfy, airing on July 15th, about determining which paranormal videos are real and which ones are fake. Do you think they have another hit on their hands or is this one you'll pass on?
4 comments
Read more

The Tale of Halcyon Crane - Review 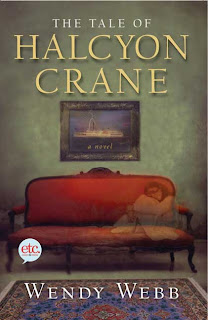 Holt Paperbacks, March 30, 2010 Paperback, 326 Pages ISBN: 978-0805091403 Horror Ordering Information: Amazon.com This tale begins with a young woman named Hallie James living in Puget Sound. On one foggy morning, she soon learns her whole existence was lived in deception thanks to two letters. One from the mother she believed to have died long ago. The second from a lawyer reporting her death. The only person who can clear up a lifetime full of lies is her Alzheimer's father. He didn't remember his own daughter on a good day. However, it only took one lucid answer to reveal the startling truth: “Madyln wrote to you?” Hallie had only known her mother as Annie. The next day, she was left facing the death of a mother that came years after she had been told and also the death of her father. On a whim she calls the lawyer, packs a bag, and leaves for Grand Manitou Island not knowing what she will find but wanting to know about the life that was taken from her. With the a
2 comments
Read more

June 10, 2010
In Weatherford, Oklahoma sits an isolated bridge of Big Deer Creek near a local university. A real death shrouded in a ghost tale. After deciding to divorce her husband on the grounds of cruelty, Katy DeWitt James and her 14-month-old daughter got on a train en route to Payne County from Custer County. She met a prostitute named Fannie Norton while on her journey and agreed to stay with Norton's brother. On July 8th, 1905, the two women and child left in a buggy declaring their return in three hours. Two hours and fifteen minutes later, Norton returned alone. Katy's father Henry, after weeks of receiving no word from her, hired a private detective to investigate her whereabouts. The detective discovered Fannie Norton took Katy and her daughter supposedly to a town called Hydro. However, their wagon disappeared in a field near Deer Creek for almost an hour. When Norton finally re-emerged, she was alone with the child. No sign of Katy anywhere. She left the child with a boy at
Post a Comment
Read more

Dawn of the Shadow Review

I rarely come across a book I can't finish. Whether it's good or bad, I try to read from cover-to-cover. Unfortunately, Dawn of the Shadow by Peter Kelly was not one of them. I didn't make it past page 21. Pete Farrell comes across a relic from another time. This find would change his life forever. However, in a state of curiosity, he inadvertently awakens a great evil. One that believes Pete is the key to their rise to power. In a struggle to find himself, he follows their lead. Whether it be by fate or accident, Pete Farrell aided in the an ultimate change descended upon the world. A synopsis alone makes this a promising read. However, I can't begin to say how much it isn't. Truth is, I couldn't get passed various rookie mistakes to get to the core of this novel. The protagonist, Pete Farrell, is suppose to be a 20-year-old college student. But within the first few pages of the novel, it felt more like he was a kid getting in to mischief with his buddies du
1 comment
Read more

June 03, 2010
Almost a year ago, I relayed the story of Maggie Duffton , a former owner of the Burnett Arms Hotel who died in 1931. A legend stated she commissioned three coffins to be made after her death, one believed to contain her body and another her money. Both walled up in a hotel cellar vault. Current owner, Malcolm Edwards hired a stone mason in 2008 to put all the rumors to rest. A 2-ft granite wall was demolished, revealing what some feared the most. Not one coffin or even two for that matter. However, paranormal activity has increased. A barmaid who used to be the cleaner many years ago saw a figure walk through a locked door one day and asked to speak to Norman. A woman has also been seen late at night wearing a pink wedding dress. Edwards has since decided to put the bar up for sale, first time in three years. He claims the ghosts haven't ran him off but is moving on to run another hotel. Anyone in the market for a Scottish bar accompanied by a few friendly ghosts?
1 comment
Read more
More posts