Showing posts from August, 2010
Show all

August 30, 2010
The wreckage of a plane has been found in deep water 800 km from her last known location. Do you think it could be that of Amelia Earhart's?
1 comment
Read more

August 29, 2010
Flipping through the channels, I came upon what is known as a "mockbuster" (a movie designed to capitalize on the success of a higher budget film, in this case Paranormal Activity ) called Paranormal Entity on ChillerTV. The premise of the movie is surveillance videos documenting the downward spiral and eventual supernatural rape and murder of a woman named Samantha Finley, all presented as fact. Throughout the movie as the alleged activity escalates, the family is constantly trying to contact a self-professed paranormal expert named Edgar Lauren to rid them of their problem. The guy finally shows up towards the end of the movie and gives them the answers they have been looking for. On a previous night, the mother, supposedly possessed or in her sleep, wrote a word on a sheet of paper: MARON. The expert explains the word MARON is Old Germanic for "nightmare" and goes on to say the entity is fairly similar to the "incubus" in the way it attacks and rapes
13 comments
Read more

Was notified that Ghost Stories was chosen as one of OnlineSchools Top 40 Paranormal Blogs! From the OnlineSchools website : This award highlights the very best blogs to learn about the Paranormal and all things related on the internet that were nominated by the internet community, and is designed to thank the authors for their contribution toward the world wide web we all use & enjoy. I would like to thank OnlineSchools for bestowing me with such an award as well as those who thought to nominate Ghost Stories and all my loyal readers. I hope to continue to make this site a useful resource for all things paranormal. Update: Ghost Stories has hit a milestone. It currently has 200 followers!!! Thank you readers!!!
12 comments
Read more 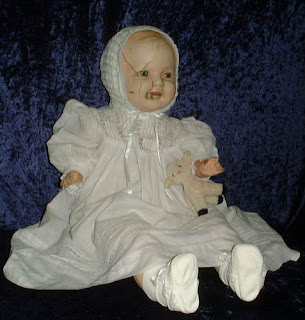 The theme around the paranormal blogosphere has been haunted dolls as of late. I’ve written about Robert the doll and the Island of Dolls in the past. Today’s entry is about one located in the Quesnel Museum in British Columbia. Mandy is an antique porcelain doll over 90 years old supposedly made in Germany or England around 1910 or 1920. She was donated to the museum in 1991. What makes her so unusual is the powers some say she possesses. Her previous owner related to the museum all the strange things she is supposedly capable of. The donor would wake up to the sounds of a crying baby in the basement. Upon inspection, she found an open window and no baby. After Mandy was donated to the museum, the crying stopped. However, the museum staff and volunteers problems were just beginning. Lunches would mysteriously disappear from the refrigerator and be found tucked away in a drawer. Objects such as pens, books and pictures would go missing. Some would turn up later. Others were never f
19 comments
Read more

August 23, 2010
Who is your favorite haunted doll?
4 comments
Read more 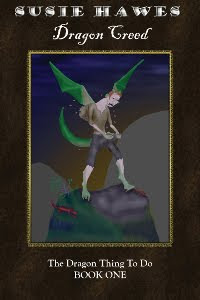 Daverana Enterprises, April 6, 2010 eBook, 102 Pages ISBN: 978-0-9826959-2-0 Ordering Information: Smashwords Farquarte found himself as an apprentice without a mentor. As a last resort to save himself from starvation, he turned to the only dragon in the country. Old, lonely and crippled, Fechum the dragon reluctantly took him on for odd jobs around his cave. Rules and regulations concerning magical creatures (and to save his own skin from execution) led to Farquarte making the jump from human to dragon in human form. Then, his desires became the same as any Reptilians Dragonus....gold. An act of patricide and a twist of fate would lead Farquarte down a magical road filled with dwarves, elves, ghosts and the royal government to establish his new life. I like a book that can make you think. We talk about the possibilities of creatures like the Loch Ness Monster or Bigfoot. Have you ever wondered what would happen if one was found, particularly alive? In the right hands, it would be
1 comment
Read more

Conjuring the Ghost of a Dead Motorcyclist

August 19, 2010
Lemon Tree Passage in Newcastle, New South Wales Australia is increasing becoming dangerous thanks to an alleged ghost. Port Stephens police are issuing more and more warnings to motorists driving 180km/h on this stretch of road, attempting to conjure the spirit of a 20-year-old motorcyclist. Supposedly, a 20-year-old Salt Ash man died in a motorcycle accident at Tanilba Bay in Port Stephens. He and his male passenger were riding on Lemon Tree Passage Road when they collided with a four-wheel drive in November 2007. Now, legend dictates, if you travel along Lemon Tree Passage Road at incredibly high speeds, a light will appear in pursuit of people who drive dangerously. More and more people are testing this legend in order to film it for YouTube (do I smell a future episode of Fact or Faked?). There are some who have tested the myth without the excessive speed and have seen the "ghost light". One should use their head. If you travel over a 100km/h to see a ghost light, you
Post a Comment
Read more

August 15, 2010
Brown Mountain, Hornet, Marfa all have something in common. Mysterious lights appear at night and have left scientists baffled for many years. The first reported sighting was in 1966 by a carload of teenagers. In Paulding, Michigan, one such light exist. Is it headlights from a car? An airplane? A natural phenomena? It's true origins may or may not but unknown but sustains certain characteristics. The Light appears every night on Robins Pond Road. Some say it sits in a fixed position and changes shape. Others claim it moves. Some have described it being white, red, green or blue in color (red and white being the most common). If you walk or drive to the light's location, it vanishes. With an unknown phenomena comes various legends to explain it. Some believe a railroad switch man, lantern in hand, was crushed to death between two cars while attempting to signal the train's engineer. Now, he is bound by that railroad tracks (which doesn't exist anymore) forever signalin
1 comment
Read more 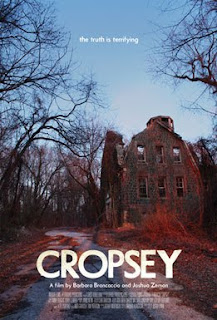 What happens when a urban legend becomes reality? Cropsey: The Urban Legend is a spine-tingling documentary which peels back the layers of fact and fiction behind one of New York's most disturbing unsolved mysteries. When five children go missing on Staten Island, filmmakers Joshua Zeman and Barbara Brancaccio realize the cautionary tales of their youth may have come true. Growing up on Staten Island, Zeman and Brancaccio had often heard the legend of "Cropsey" - the escaped mental patient who lived in the abandoned tunnels of the Willowbrook mental hospital and came at night to snatch children off the streets. "Cropsey" remained just that, an urban legend, until the summer of 1987 when a 13-year-old girl with Down syndrome disappeared from her neighborhood. Five weeks later, she was found buried in a shallow grave on the grounds of Willowbrook. Investigators soon link this case to four other missing children cases in the area - none of whom had been found.
Post a Comment
Read more

August 09, 2010
What is a laser burst device and how is it effectively used during a paranormal investigation?
1 comment
Read more

August 06, 2010
In late May, the infamous "Amityville Horror" house went up for sale with a $1.5 million price tag. Over two months later, a buyer was found. The Dutch Colonial at 108 Ocean Ave. was made famous by The Amityville Horror book and movies as well as being the site of the 1974 DeFeo murders. The five-bedroom, 3.5-bath home went through extensive renovations including the boathouse, the bulk head, the central air conditioning, the gas heating system, the roof, the windows, the sprinkler system, the central stereo system, the deck and the patio by the current owners. Former owners changed the well known address from 112 Ocean Ave. to guard their privacy. The house went in to contract this week. However, rumors dictate they live and are active in the community. It is believed the buyers are retirees David D'Antonio and his wife but neither has made a comment to confirm or deny it. At this time, this has not been confirmed. Details on how much was offered for the property
4 comments
Read more

August 04, 2010
"Once upon a time, an older man, tall in nature and dressed in black, entered in to the Rataskaevu Residence Hotel a.k.a. The Old House in the 16th Century. He approached the landlord inquiring about obtaining an apartment for a wedding. He offered to pay the landlord a substantial amount of money if one condition was met. Under no circumstances could the landlord enter, approach, or peek in on this utmost secret affair. The landlord was broke and near suicidal. He eagerly agreed to the man's terms and offered him Apartment 6. Late in to the night, the landlord heard loud noises, people going up and down the stairs and ungodly racket from Apartment 6. He became intrigued to see why this wedding was cloaked in secrecy. He approached the door to Apartment 6. Falling to bended knee, he peered through the keyhole. What he saw would haunt him to the day he died. He fled from the door in sheer panic. He told his wife of what he witnessed. He said to her it was the devil. The Devil
Post a Comment
Read more

August 02, 2010
How do you think a UFO investigation should be conducted?
Post a Comment
Read more
More posts