Showing posts from February, 2011
Show all

February 28, 2011
There are many theories about crop circles, one involves witchcraft. Do you think witchcraft is responsible for some of these formations?
1 comment
Read more

The Klinge Brothers, Brad and Barry, from Everyday Paranormal and the Discovery Channel show, “GHOST LAB”

Dash Beardsley, "The Ghost Man of Galveston," creator and founder of, "Ghost Tours Of Galveston"

Jeanine Plumer, founder of www.HauntedTexas.com and “Ghost Tours of Austin”

Space is limited, buy your tickets online to SAVE $15!! Online ticket holders automatically get entered into a SPECIAL PRIZE DRAWING!

One of the UK's biggest theme parks was forced to move a new ride to another part of the property earlier this month. Why? This decision was made after fears rose they had disturbed an ancient burial ground, resulting in paranormal activity.

Workers building the water ride at Thorpe Park in Surrey said they started witnessing ghostly sightings nearby, including what appeared to be a headless monk. There were also reports of objects being moved, workers feeling like they're being watched and cold spots.

To further look in to the matter, a paranormal investigation team, South West London Paranormal, was called in to look into the matter. They determined, using investigative techniques, Quija board sessions and mediums, an ancient burial ground or settlement may have been disturbed.

The 64ft-tall water ride, Storm Surge, was originally planned for an area known as Monk's Walk, an old footpath that has linked the ruins of nearby Chertsey Abbey to Thorpe Church since 666 AD. Th…
1 comment
Read more

February 21, 2011
Are there any known incidents of people being attacked by a cloud?
Post a Comment
Read more

No question this week.

February 10, 2011
The Emela-ntouka is a mythic African legendary creature among the Pygmy tribes. Its name means "killer of the elephants" in the Lingala language and is also known as the Aseka-moke, Njago-gunda, Ngamba-namae, Chipekwe or Irizima.

The Emela-ntouka is around the size of an African Bush Elephant, brownish to gray in color, with a heavy tail, and a body of similar to a rhinoceros. It has one long horn on its snout although it is unknown what the horn is made of whether it be ivory, bone or keratin. It is described as having no frills or ridges along the neck. The animal is alleged to be semi-aquatic and feed on Malombo and other leafy plants. The Emela-ntouka is known to snort, rumble or growl.

This cryptid is alleged to mainly inhabit the vast shallow waters in the swamps and lakes of the Congo River basin, particularly in the Likouala swamps in the Republic of the Congo. It is also said to inhabit Lake Bangweulu in Zambia. They are claimed to be solitary and herbivores. Locals…
Post a Comment
Read more

February 06, 2011
In honor of the Green Bay Packers big Super Bowl win, I thought we would explore a few myths tied to the annual event:

2. Myth: There's an increase in domestic violence on Super Bowl Sunday. - In 1993, a coalition of w…
1 comment
Read more

There's Something Under the Bed Review 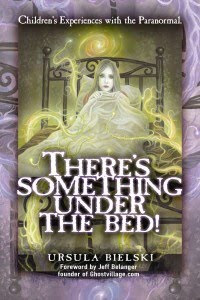 Bielski helps to paint a clear picture of the sometimes startling realities behind what many parents believe is their child’s overactive imagination. As parents, it can be easy to brush off a child’s insistence that someone else is in the room by dismissing fears, or making light of the situation. Rather than engage in fear-based confirmations, parents can help to encourage children to understand what they see and hear in the world around them, even if they themselves do not see and hear them. Extremely well-written, this informat…
3 comments
Read more

The Legend of Lucy Keyes

February 02, 2011
How can a four-year-old girl disappear without a trace? Robert Keyes moved his family to Princeton, Massachusetts in 1751, purchasing 200 acres of land on the South-Eastern slope of the Wachusett Mountain. Four years later on April 14th, his daughter Lucy (4) followed her sisters to Wachusett Lake for some sand. This adventure in the woods would be her last. Lucy never returned home.

The townspeople created search parties, drained the lake, but came up empty-handed. Lucy's mother, Martha scoured the woods, calling for her. Night after night, she searched the woods. Her grief overwhelmed her sanity. She died in 1786 never knowing what happened to her daughter.

There are many theories as to what happened to Lucy Keyes. There was a letter found after Martha and Robert Keyes had died. This letter was from the Keyes' neighbor Tilly Littlejohn written on his deathbed. He had a quarrel with the Keyes over property line. and resented the family's happiness. When he spotted Lucy Ke…
Post a Comment
Read more
More posts