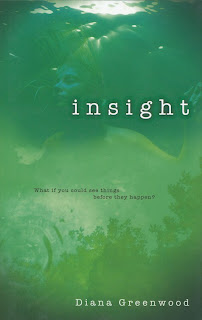 Some secrets won't let you go. Elvira Witsil lives about as far away from civilization as you can get, in a remote corner of Wisconsin where nothing much ever happens. In a house crowded with her mother, her cantankerous grandmother, and her little sister, Jessie, Elvira feels forgotten and alone. Their house also contains numerous secrets, and Elvira's family holds their secrets closely. Secrets about the father that Jessie never knew, and that Elvira can't forget. Secrets about that day five years ago. And the one secret that Elvira can't quite understand: that Jessie sees things no one else can see. These secrets will lead Elvira and her family on a journey far away from home---on a journey toward redemption and healing---if she can just bring herself to believe.

Insight is the debut novel from Diana Greenwood and is rather Christian heavy. It’s mostly about the inner struggles of Elvira’s relationships with each member of her family as well as her relationship with God. I think the loose ends of her father’s death and her strained relationship with her mother wraps up way too quickly. Throughout most of the book Elvira blamed herself for her father’s death. The majority of interactions with her mother were tense. In one conversation, all that was cleared up. Doesn’t seem very realistic.

Also, I hated the mother throughout most of this book. She is bitter (some of which is directed towards her eldest daughter) for the most part who seduces a preacher to drive her and her family to California and uses her psychic daughter to get money. Then, towards the end, you get whiplash shifting to sympathy. I think if there were more sprinkles of clues concerning her true feelings it would have helped the reader understand her more.

Overall, it's a nice little book for a debut, but there is still room for improvement. I would recommend it for young adults.
TV/Movies/Books

Anonymous said…
Elvira? Wow. Not a name I would expect from Zondervan. They must be getting "edgy" in their old age.
Write1Sub1 RELOADED
10:05 AM