The Ghosts of Lone Jack - Review 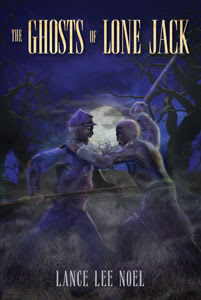 What do you get when you mix a piece of American history, ghosts and children? The Ghosts of Lone Jack By: Lance Lee Noel.

Jared Milhouse spends what seems like a quiet summer at his grandfather’s farm in Lone Jack, Missouri. A chance encounter with a female spirit during the tail end of a baseball game changes his life forever. With the aid of his acquired new friends of the Crossroads Club, his dad, grandfather, two town eccentrics and a couple of amateur ghost hunters, he explores the story of one of the bloodiest battles in the Civil War and looks for the key to release the town from a decades old curse.

The Battle of Lone Jack was a very real conflict that took place on August 16, 1862. This being one of the most appealing aspects of this story. Another being the actual battlefield is reportedly haunted: phantom campfires, smells, voices and apparitions of Union/Rebel soldiers. I admire the author’s intentions with this novel. Use a real piece of history within a fictional plot as a teaching tool for kids. I liked the story premise. The protagonist, Jared, is a character kids can relate to. I think one of the major problems I had with it was the story structure. It could be a lot tighter than it is. It starts off a little slow. The descriptions are a little hit or miss at times. Slows the pacing of the story. When some of the characters go in to details about the battle, the regional dialect tends to get lost at times. I want to hear the story but have it sound like it’s actually coming from that character and not a historian.

Another problem is all the point of view transitions. The big action scene towards the end is all over the place. Definitely on the verge of confusion. One or two point of views would have been better than like five. Then there were the rookie mistakes: spelling, grammar, scene blocking, etc. All of which should have been taken care of during the editing phase. I think if the author took a bit more time with editing he could have made it so much better. The Battle of Lone Jack is a story worth telling but how you tell it is just as important, especially in this case as some of the proceeds are being donated to the Lone Jack Civil War Battlefield, Museum & Soldier’s Cemetery.

All in all, this is a book worth the purchase. Perhaps not written in the best of the author’s ability. But one kids will enjoy for the fruits of a ghost story and a history lesson blended together for their entertainment.