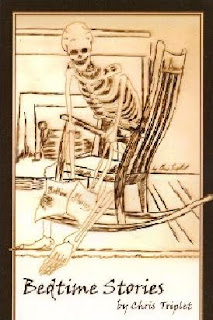 Bedtime Stories by: Chris Triplet (Rose Dog Books) contains four short stories of a supernatural nature. From ghosts to witches to demonic possession, the human spirit is challenged to overcome obstacles with faith and sacrifice.

In “The Covered Bridge,” faith is pitted against an evil presence which must be exorcised by five brave souls.

In “The Campfire,” two men come upon a site that defies the fabric of nature.

In “The Witch,” a man is willing to sacrifice his soul to save his wife from a vengeful demon.

In “The House of Echoes,” a woman and her three children stand together against the spirits that surround them.

Based in Spain and Mexico, these accounts were handed down as ghost stories from mother to children to not only entertain but to share family history. To make it even more of a family affair, the author's sister Barbara Book provided the cover art.

Chris Triplet was born and raised in Monroe, Louisiana. His father’s family emigrated from Ireland in the mid-nineteenth century, and his mother’s family came from Spain in the early part of the twentieth century.

One of six children, he grew up reading science fiction - something his father introduced him to. With a large book collection, Chris now enjoys all variety of fiction. After school, he worked many diverse jobs, which led him to Decatur, Illinois, where he now works at a local bank.

You can find Chris at his blog Bedtime Stories/The Forgiving Heart or his Facebook page.
TV/Movies/Books