When I was young, I devoured every ghost story I could, but I’d never come across any real ones. They were strictly fantasy.

Have you ever encountered a ghost in your wanderings? I have...but the first one wasn't the usual human type spirit though.

Here I was, sleeping on a cold night with our Army ROTC cadets on the rocky ground in Palo Duro Canyon. But not sleeping exactly. Everyone else was, but I'm born of the Princess and the Pea blood...which means, anything can bruise me.

So the lumpy, rocky ground kept me awake, the cold, the sounds in the night, the breeze stirring over the cliffs, the thought rattlesnakes, or tarantulas, or scorpions would seek heat would find their way into my sleeping bag, kept me awake. I stared at the sky that stretched forever. The Texas sky does, you know. In other places, mountains and trees and buildings might break up the sky, but not out there. Not in the vast wilderness that was the Panhandle of Texas. The stars sparkled across the dark sky like jewels twinkling in the night. And I was frustrated with myself

for not being able to sleep, knowing we had to run up and down the hills in the morning to search for clues on an orienteering course.

Sometime during that night, I finally drifted off, but then heard the sound of horses running, stampeding in our direction. They snorted and whinnied and the sound was frightening.

I recalled deer running through our friends' tent when we camped off an island in our boat in a lake in California. They don't go around, I thought. The horses will run straight through us and trample us to death. I tried to wake my sister who was sleeping in a bag next to me. She grumbled at me to leave her alone and I watched the others in the dark. No one heard t 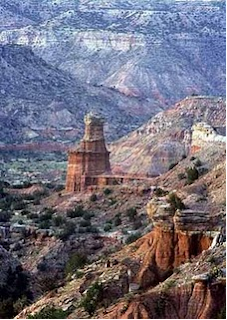 he noise but me.

I lay back hoping that the horses would skirt around us. I realized the pounding of hooves didn't shake the ground like it should have. Maybe they were too far away. And then, they moved off in the distance, fading until they were gone. I lay awake for a long time, unable to get over how close we could have been to being trampled, fearing their return. That they'd switch back and come this way again.

And then finally, I was able to sleep and before I knew it, we were sitting at a campfire, cold, achy, having breakfast. I asked about the wild horses. Our cadre said there could be. Sure. But no one had heard anything last night.

Years later, I wanted to write about the wild horses for a magazine, only when I began to research them, I learned 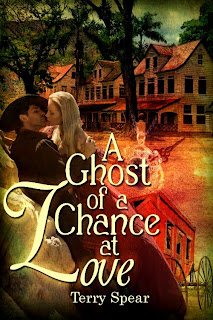 others had heard the ghost ponies in the dead of the night. I sat slack-jawed reading the accounts. Ghost ponies? For years, I had believed they were real. The sound of their running, snorts, whinnies were real. It happened.

But they were whispers of the past--of soldiers running Indian ponies off the cliffs in an attempt to keep the gathered tribes from fighting back. Without their horses, the tribes could no longer be mobile. They could no longer mount any campaigns.

The horses were terrified and were driven to their deaths. And now, they live in the canyon forever, a memory of past deeds, a remembrance of their past life.

Because of my love of ghost stories and the wild west, I’ve written A GHOST OF A CHANCE AT LOVE, a ghostly time travel romance set in Salado and Waco, Texas, which you can purchase on Amazon. To learn more about Terry, you can visit her website at www.terryspear.com.
Reader Submission

Unknown said…
Terry, I am a native of Texas and lived in the area where you speak about the Ghost Horses. You speak an untruth when you say the horses of 1874 were ran off a cliff. What really happened was they were all shot to death by Mackenzie's men. 3000 Comanche Ponies so they could not be used to raid settlers in the surrounding areas. I have heard the Ghost Horses in 1974 out on my parents farm not far from the canyons. No they were not ran off a cliff so tell the story correctly. Thanks for trying.
Theresa
1:13 PM