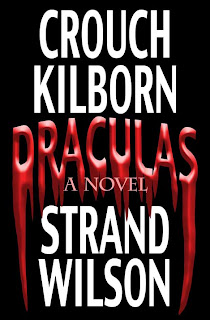 Mortimer Moorecook, retired Wall Street raider, avid collector, is losing his fight against cancer. With weeks to live, a package arrives at the door of his hillside mansion—an artifact he paid millions for…a hominoid skull with elongated teeth, discovered in a farmer’s field in the Romanian countryside. With Shanna, his beautiful research assistant looking on, he sinks the skull’s razor sharp fangs into his neck, and immediately goes into convulsions.

OPENS THE DOOR TO AN ANCIENT EVIL...

A rural hospital. A slow night in the ER. Until Moorecook arrives strapped to a gurney, where he promptly codes and dies.

WHERE DEATH IS JUST THE BEGINNING.

Four well-known horror authors pool their penchants for scares and thrills, and tackle one of the greatest of all legends, with each writer creating a unique character and following them through a vampire outbreak in a secluded hospital.

The goal was simple: write the most intense novel they possibly could.

A Word of Warning:

Within these pages, you will find no black capes, no satin-lined coffins, no brooding heartthrobs who want to talk about your feelings. Forget sunlight and stakes. Throw out your garlic and your crosses. This is the Anti-TWILIGHT.

I'm well aware of each of these four authors, Jeff Strand, Blake Crouch, F. Paul Wilson and J. A. Konrath under the pen name of Jack Kilborn, but haven't had the privilege of exploring each of their individual works which is why I consider this a real treat. I want to first point out this is not the combination of several tales in one book. DRACULAS is the combination of four authors talents in to one story. The debut collaboration from four of the genres finest authors. Their take on the vampire myth (hence the title). No lovey-dovey Twilight twerps. These are vampires at their most primal. Get in their crosshairs and consider yourself dead.

This is quite refreshing after all the romanticism vampires have become thanks to Twilight, Vampire Diaries and even True Blood. In DRACULAS, they're viewed as the monster they really are. Multiple POVs should really be left to the experts. This book is an example as to why. The story contains POV shifts between over ten different characters. Each is very crisp. All details between each character lines up with the others. Didn't see any major problems with this. The pacing is fast and steady. Characters are engaging and yes, they had to throw in a vampire clown. The story wouldn't be complete without one. And there is plenty of bonus material for readers and writers alike to drool over. However, I do have a couple of drawbacks.

There were a couple of misspellings (since been corrected, I have been assured). I can overlook a couple but not thirty. I didn't understand why after turning in to the Dracula creature why none of them beelined for the blood bank. They retained some rational thought while craving blood. That would be the first place I'd look for a good meal. Yet, I don't recall any of the DRACULAS creatures actually doing it. I wasn't totally sold on the ending. You have patient zero, Mortimer Moorecook, emerging literary as a new man under the guise of Dr. Cook after the infection is "contained". I felt like some of the scenes toward the ending could have been drawn out a little more. I think they shouldn't have cut so much out.

Overall, DRACULAS is a great read for anyone who loves a gore-fest and is tired of the pretty boy vampires.
TV/Movies/Books