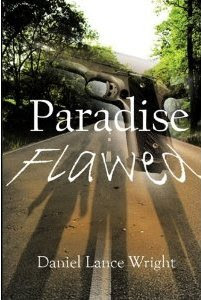 After 20 years working at Weaver Oilfield Tool and Supply, the need to alleviate stress hits Texas resident Mike Hanson hard. A relaxing vacation in the New Mexican mountains provides a chance to also refocus on his family. However, an explosion of a gasoline tanker truck eliminates all mellow plans. Mountain updrafts sends Hanson, daughter Jojo, Paradise Mountain Resort owner Katy and her son Josh up Grant Peak in to a 19th Century gold mine for refuge. As they fight for survival, they soon learn the explosion was no accident. Hanson is being targeted for elimination. Will they make it off Grant Peak alive?

Daniel Lance Wright's Paradise Flawed sends the reader on a wild ride of survival, conspiracy and gold. However, I'm not sure how much of the story I, as a reader, can believe. First of all, why rig a gasoline tanker explosion to kill one man? Could a 70-year-old oil tycoon not come up with something a bit more discreet, especially since the mountain resort is located in a small town and not fully booked? I can buy it if the explosion was to serve more than one purpose but no other one was explored with in the storyline. Matter of fact, the villain, Barry Ezell, barely makes an appearance in the novel at all.

Next, there's the romance between Mike and Katy. One moment, he's overly protective of his shallow wife. Then one second after meeting Katy, he does a total 180; barely grieves for his wife's death before exploring his feelings for Katy. Granted the romance is more of a series of teases. I guess I expect a man who goes out of his way to be watchful over a wife who doesn't give a damn about him or anyone else would be a bit more emotional over her death. The guy deserves to be happy with someone who cares about him. I guess it's the timing of the whole thing and the fact his daughter pushes for it as well.

Paradise Flawed has similar structural problems as Reads Like Murder in Honolulu which I'm sure has or will be corrected. Excluding the prologue, the mystery portion doesn't really come in to play until page 200 (digital version) as the beginning starts off rather slow. The action scenes are a bit sluggish at times. I feel like someone was telling me what happened instead of experiencing it as the story progressed. There were a few scenes that read more like an after school special; seemed a bit out of place. With the mystery elements,t he characters eventually had all the pieces to the puzzle but felt frustrating as a reader because they weren't putting it all together until the very end as if the writer was trying to wrap it up quickly. This leads me to the ending. Mike and Katy had the primary romance. However, a second one sort of developed between Mikes friend and co-worker Ed and a local diner owner named Rachael. The book ended with them. I think the scene is essential but not as an ending. The quick portion of the ending was with Katy and Mike and Ed and Rachael had a more progressed moment. I think it should have been the other way around. Felt rather disappointed.

Overall, Paradise Flawed serves as a fun fast pace adventure for your enjoyment.

Giveaway: I have three digital copies of this book to giveaway. This will be a first-come-first-serve type of thing. A copy of Paradise Flawed will be given to the first three people who send me an email request to paranormal_stories2004(at)yahoo.com.
TV/Movies/Books